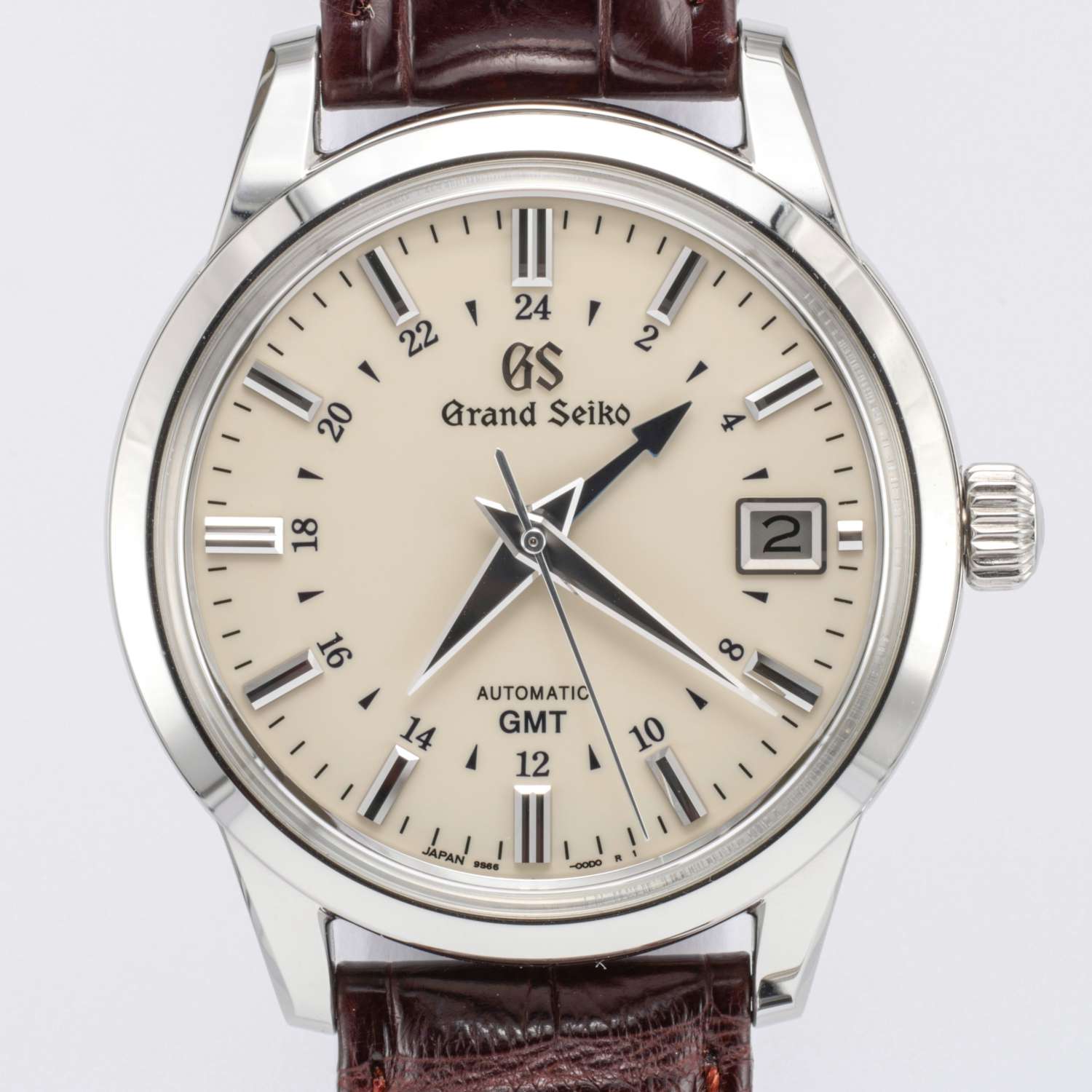 The Grand Seiko Elegance GMT SBGM221 is a beautiful example of the famed craftsmanship that Grand Seiko is known for. Every detail, from the zaratsu polishing, the intricate hour markers on the dial, and the showcase sapphire display of the movement, make the GMT SBGM221 an excellent example of Grand Seiko’s exemplary build and design quality. 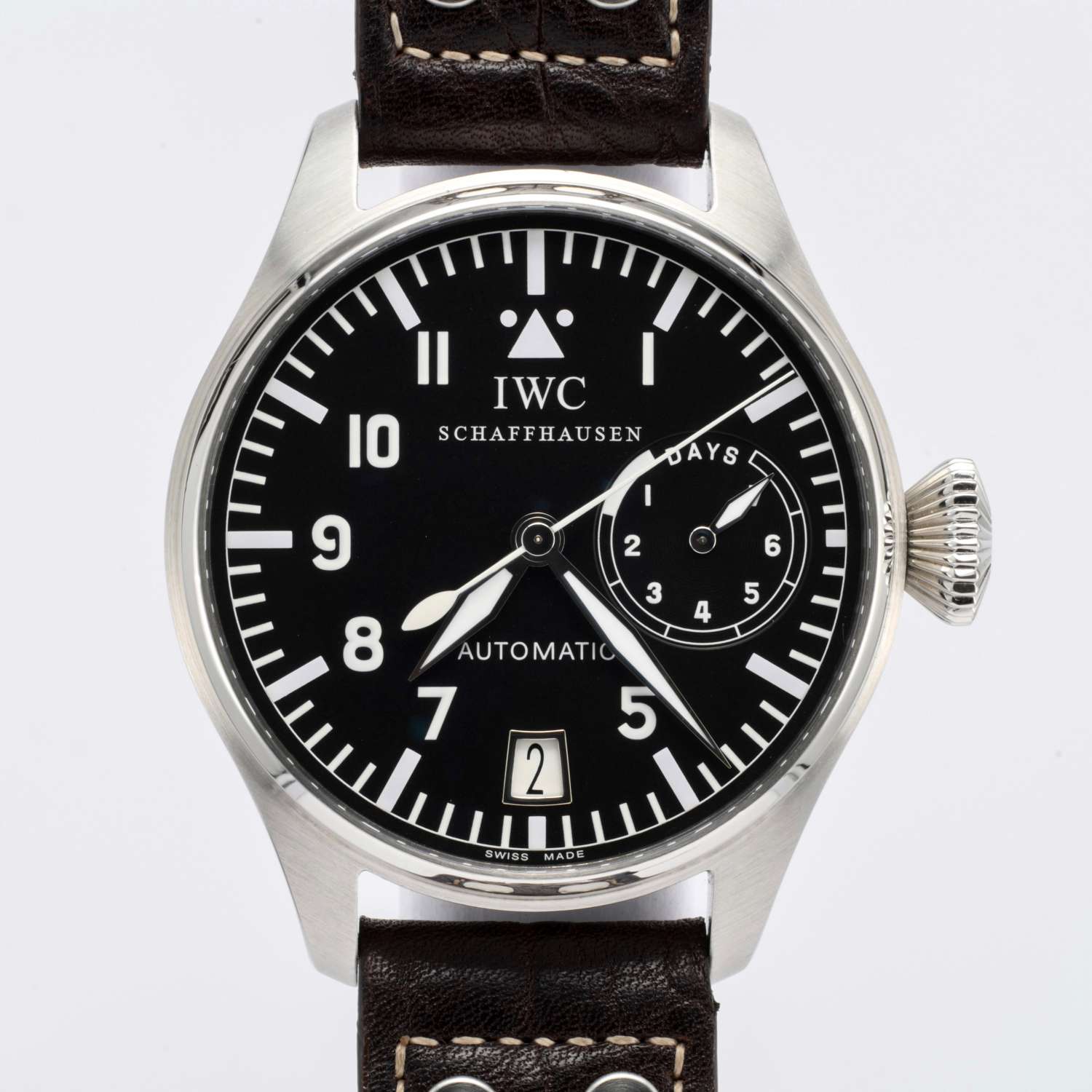 The IWC Big Pilot Reference 5002 is the first edition of the iconic Big Pilot series watches. Its design is based on a navigation watch that was introduced in 1940, the IWC ref. 431/Type 52 T.S.C., which utilized a modified pocket watch movement and was produced for military pilots of the era. With its signature, large “onion” type crown, 46 mm case size, and a 7-day power reserve indicator on the dial, the Big Pilot is easily identifiable on the wrist. 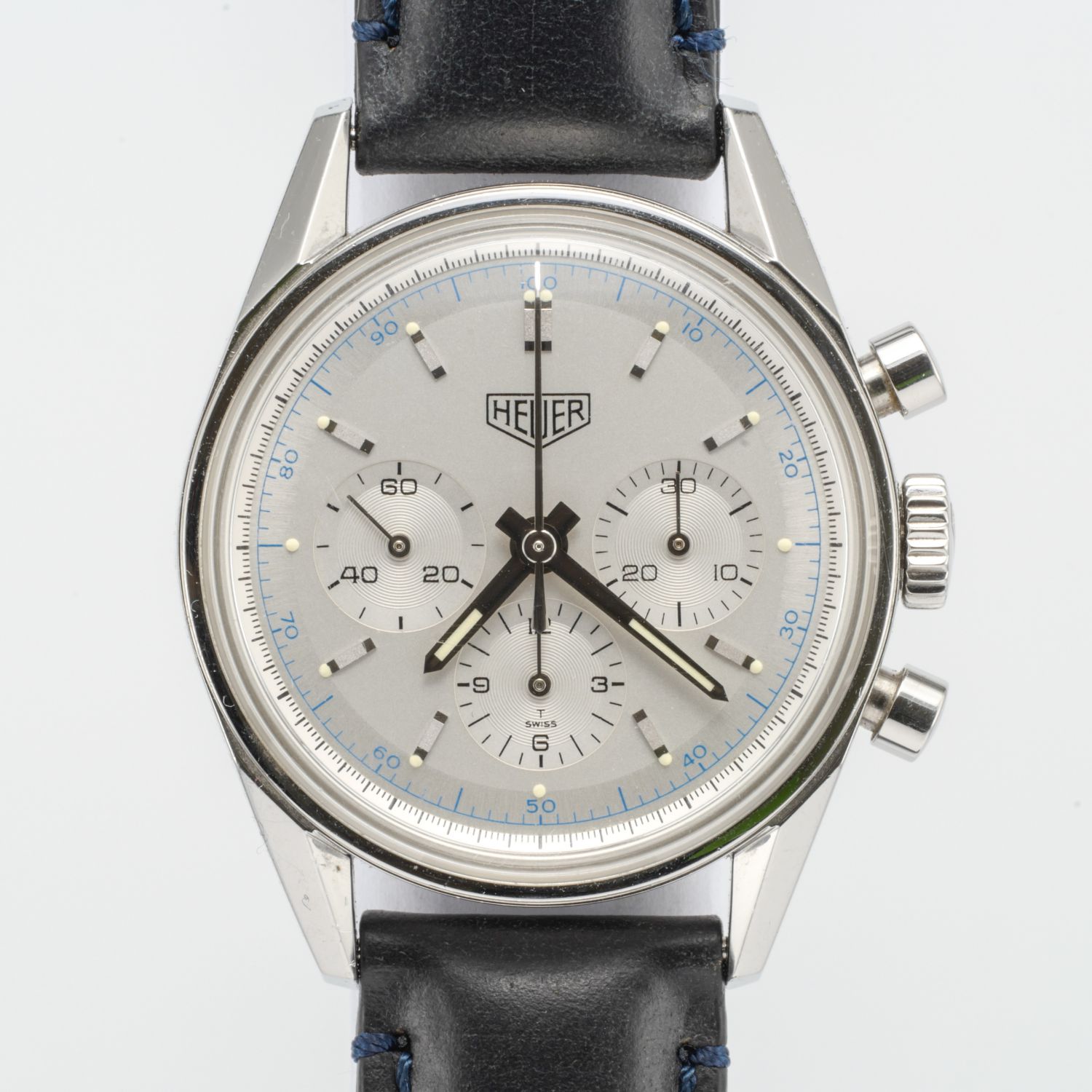 In the early 1960s, Jack Heuer created the Carrera line of chronograph timepieces, which was sold as a separate line of Heuer watches. Named after the legendary Carrera Panamerica Rally race, the watch was designed with the race car driver in mind. In 1996, Tag Heuer decided to produce a re-edition of the iconic 1964 Heuer Carrera. These re-edition watches are nearly identical to their predecessors, utilizing the same case size and styling. 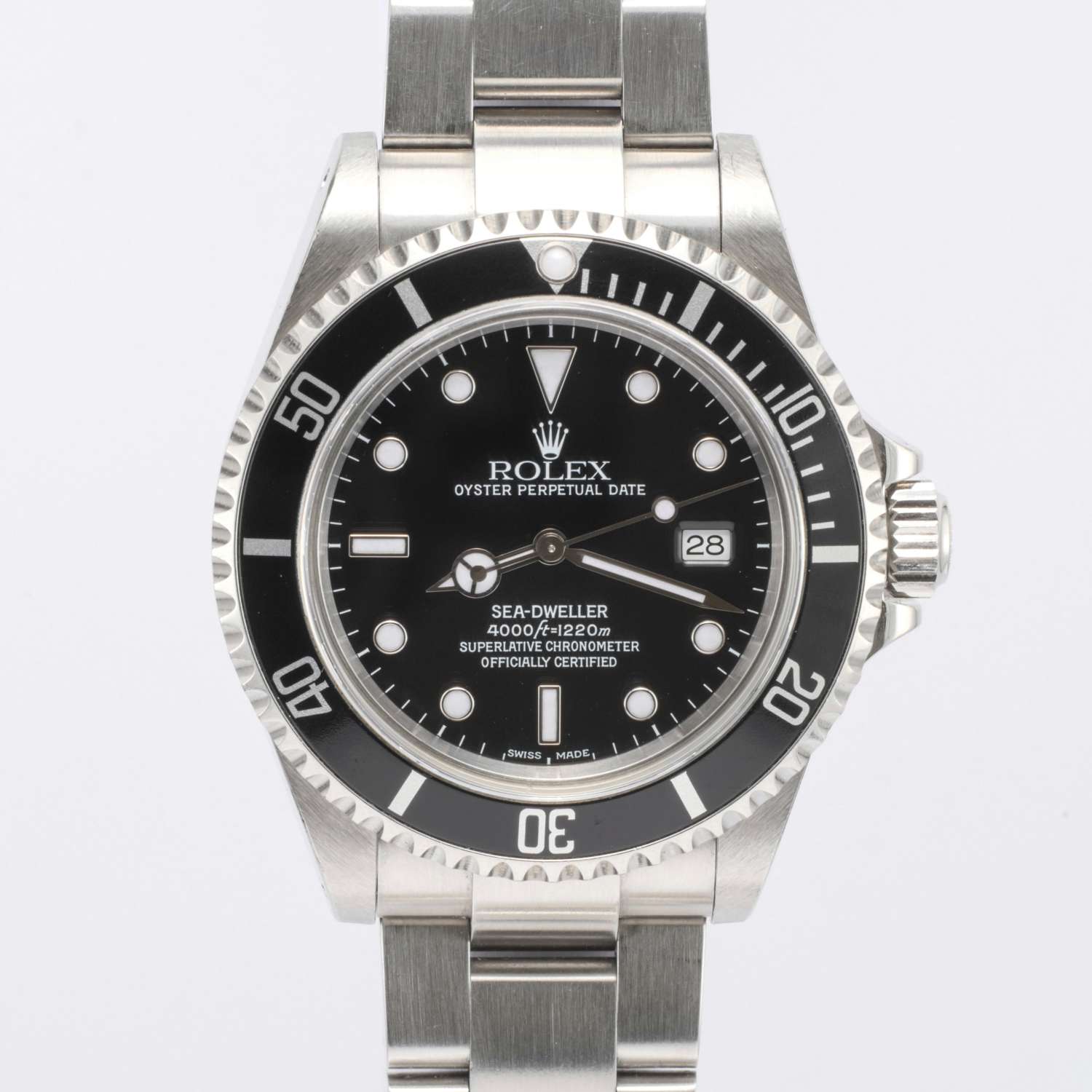 The Rolex Sea-Dweller was designed with saturation divers in mind. Due to the use of helium in the gas mixture during saturation dives, helium particles would accumulate in the cases of diving watches, during extended periods at depth, which would then escape through the weakest parts of a watch during decompression. Many times, it would escape by popping the Plexiglas crystal off of the watch. Rolex developed the helium escape valve, built into the side of the watch case, to combat this issue, and therefore allow for a safe release of the gas, and continued reliability and durability of the watch. 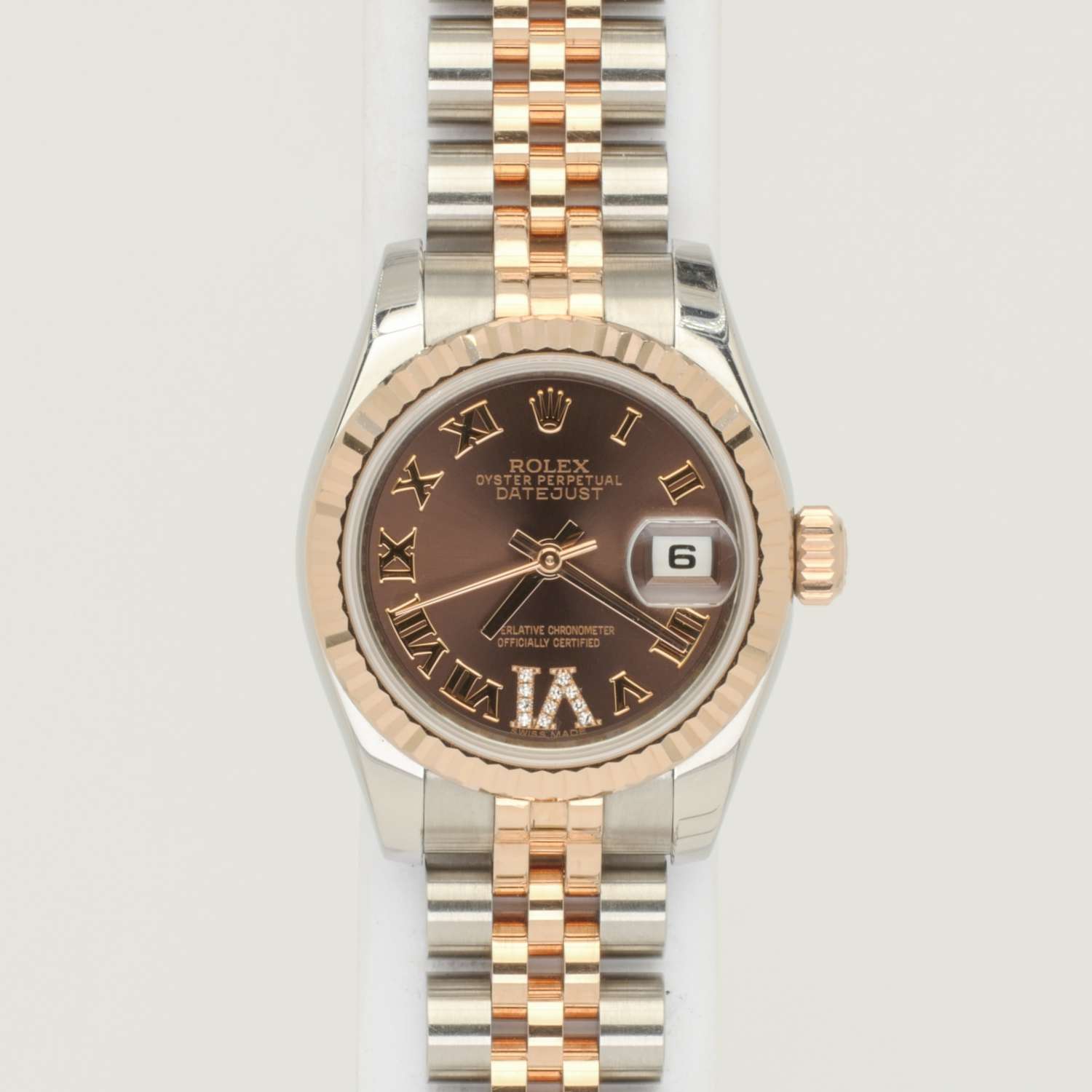 The Rolex Ladies Datejust, Ref 179171 is a classic example of Rolex’s refined glamour, style, and the technical performance that the Rolex brand is known for. Along with it’s Rose Gold and Stainless Steel Jubilee bracelet, the detail on this watch is truly magnificent. With its rose gold accents, the fluted bezel, and the diamond-covered VI, the Ref 179171 is an iconic beauty. 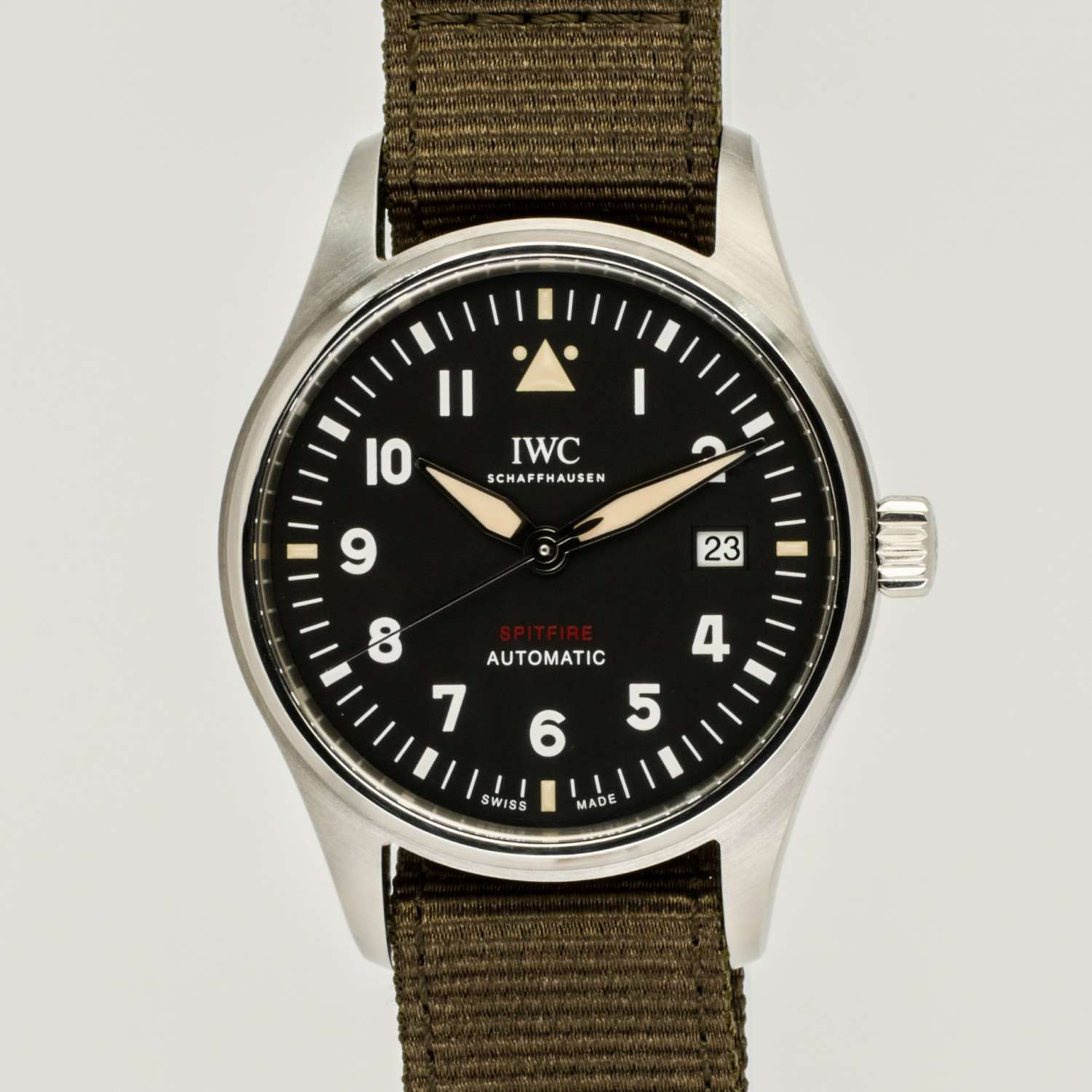 The IWC Pilot’s Watch Automatic Spitfire design holds true to the instrument design of the Mark 11 navigation watch, produced for the British Navy in the late 1940s. The design and colors of both the dial and textile strap draw their inspiration from the interior colors of the cockpit of the Mark 11 fighter plane. The IWC Spitfire has a vintage aesthetic with modern horological technology by one of the most prestigious watchmakers in the world. 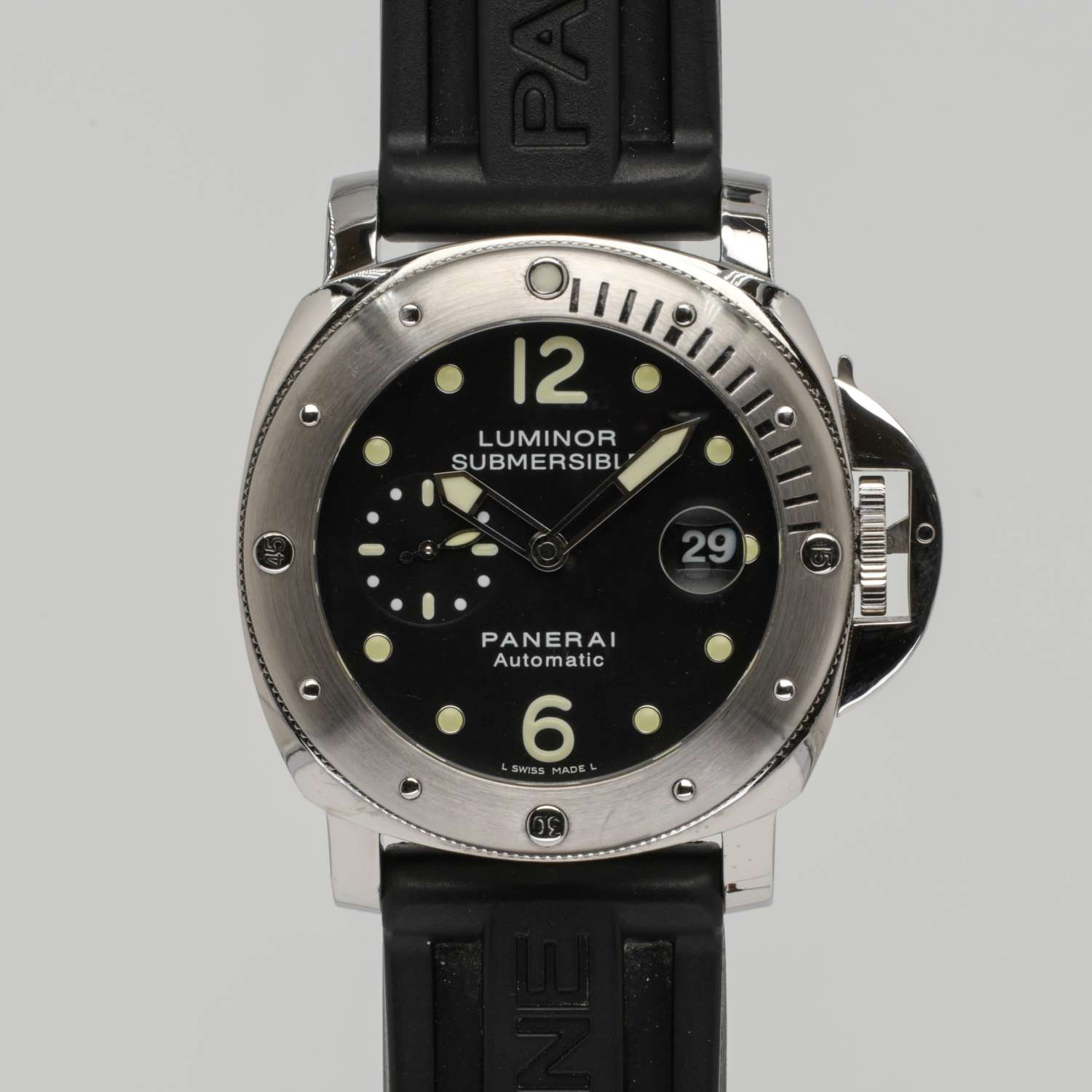 The Panerai Luminor Submersible PAM 24 is an impressive timepiece, made to withstand the deepest depths. It’s sporty aesthetic, classic Panerai styling and multiple functions give this hearty watch much to admire. 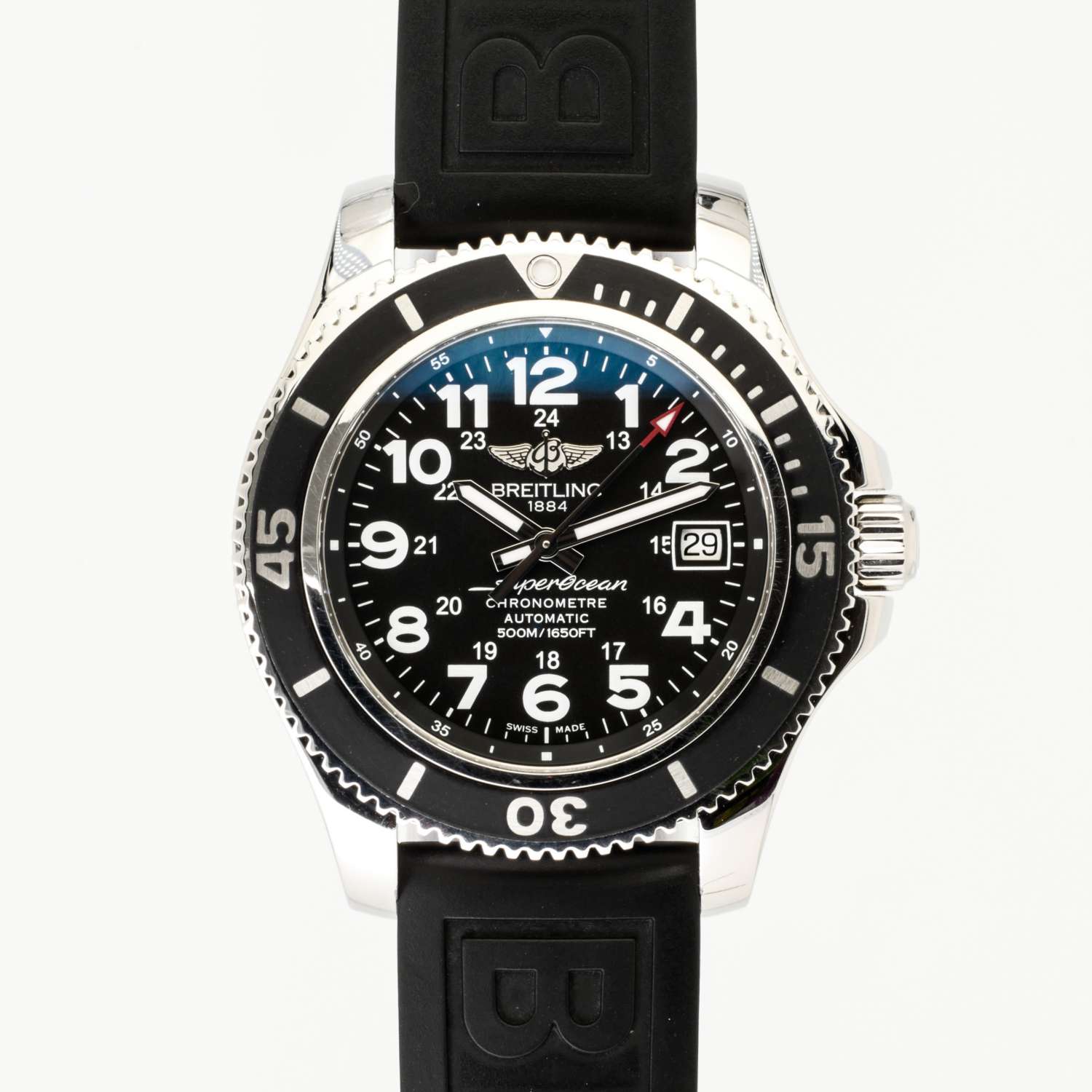 The Breitling Super Ocean II Ref A17365 continues the heritage of Breitling’s Super Ocean line, as it is a superb, reliable, and highly functional dive watch. Its design has a sporty aesthetic, with its large Arabic style numerals, large case size, as well as having a water resistance rating of 500 meters. 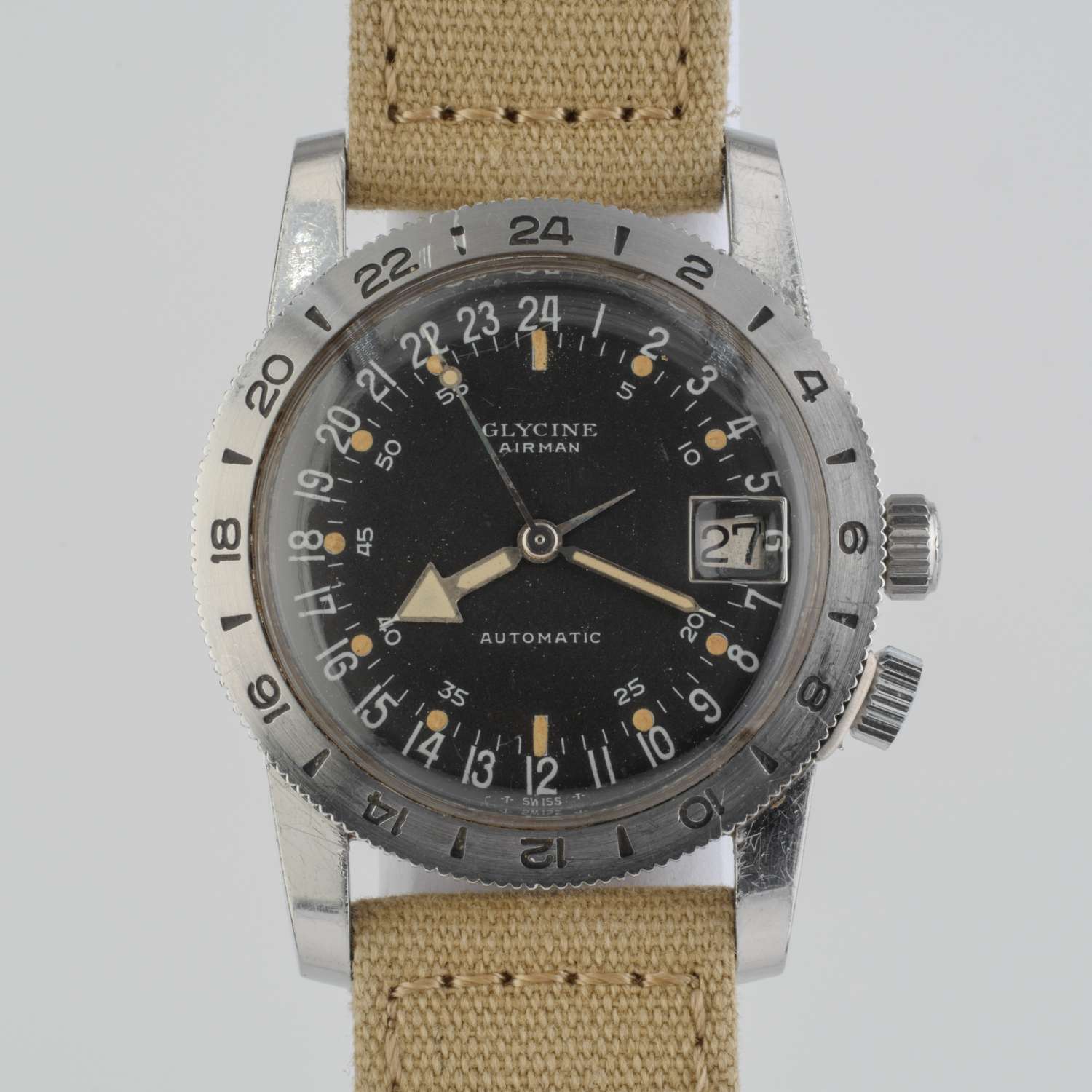 The Glycine Airman was the first 24-hour dial wristwatch with the ability to track a second time zone. It was very popular choice with military pilots, during the 1960’s, due in part to it’s clear, large, easily readable dial, as well as it’s purpose-built design, giving a pilot every tool he would need on a wristwatch. 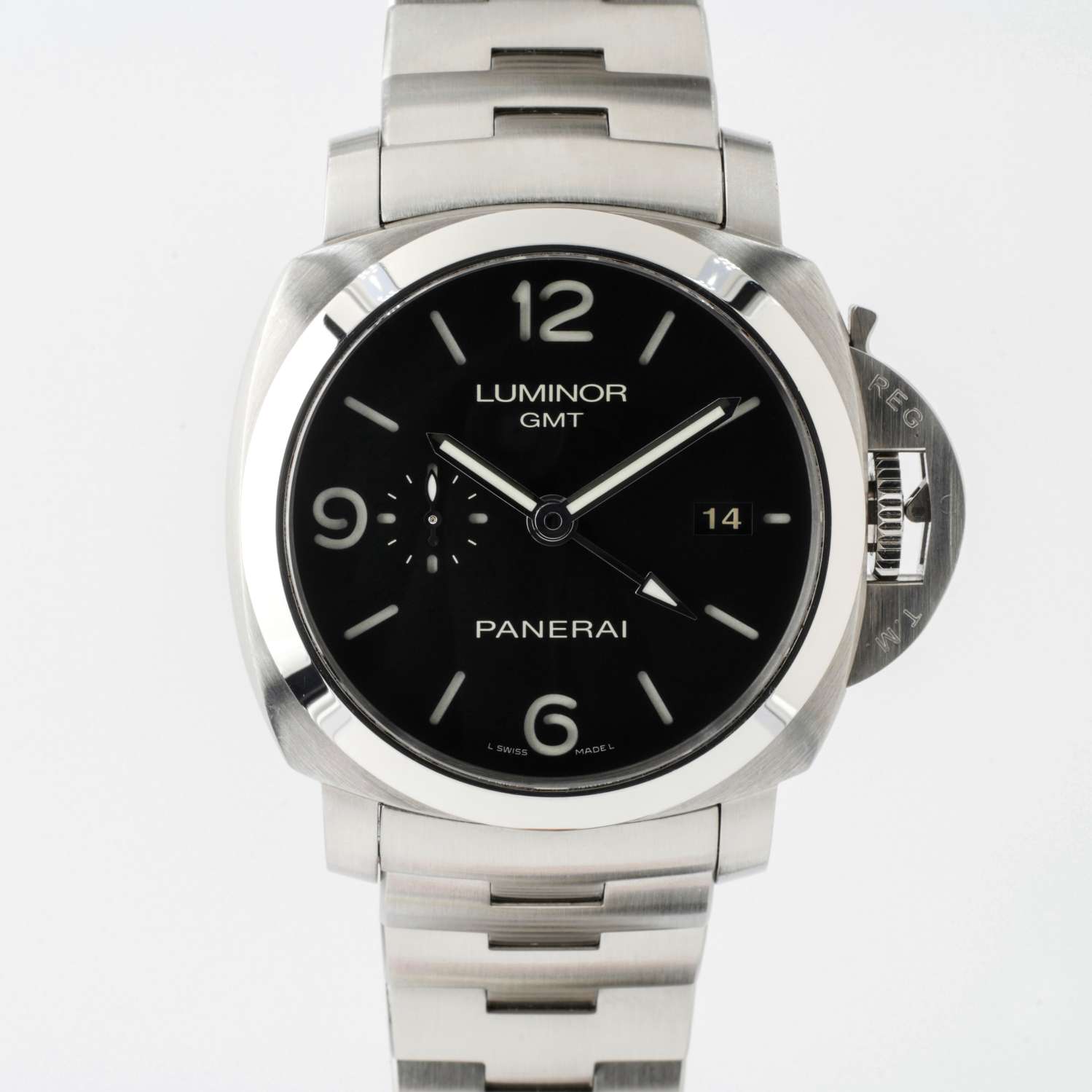 The Panerai PAM 329 is a beautiful nod back to Panerai’s rich history of watchmaking for the Italian Navy. Its stainless steel case with exhibition back showcases Panerai’s in-house P.9001 movement and holds on to the well known Panerai classic styling. It has GMT functionality and a 3-day power reserve that is cleverly displayed on the exhibition case side of the watch, maintaining the clean appearance on the dial that is quintessential Panerai design. 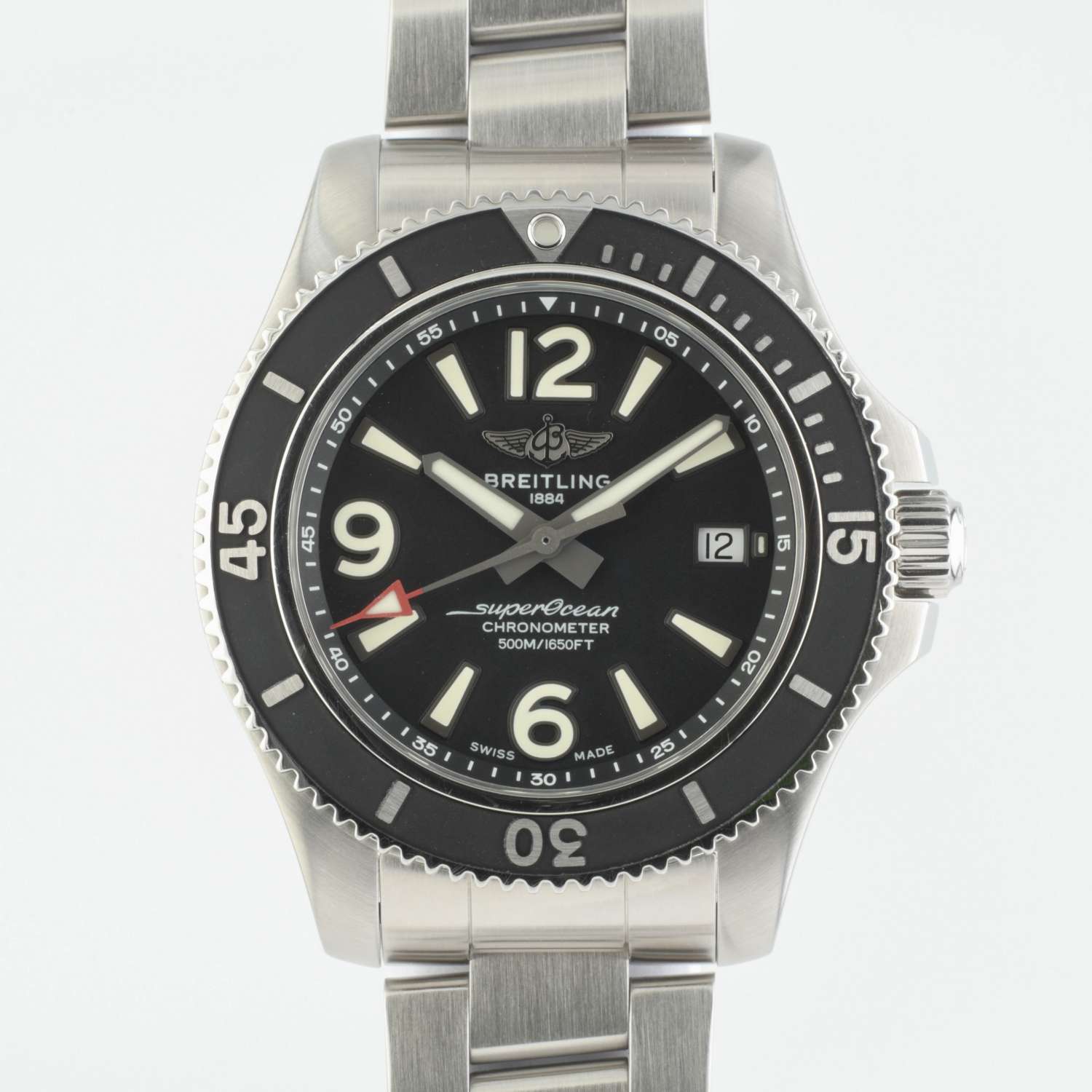 The Breitling Superocean Automatic 42 continues the heritage of Breitling’s Superocean line, as it is a superb, reliable, and highly functional dive watch. It also showcases a few design changes to the dial, giving it a more modern aesthetic. 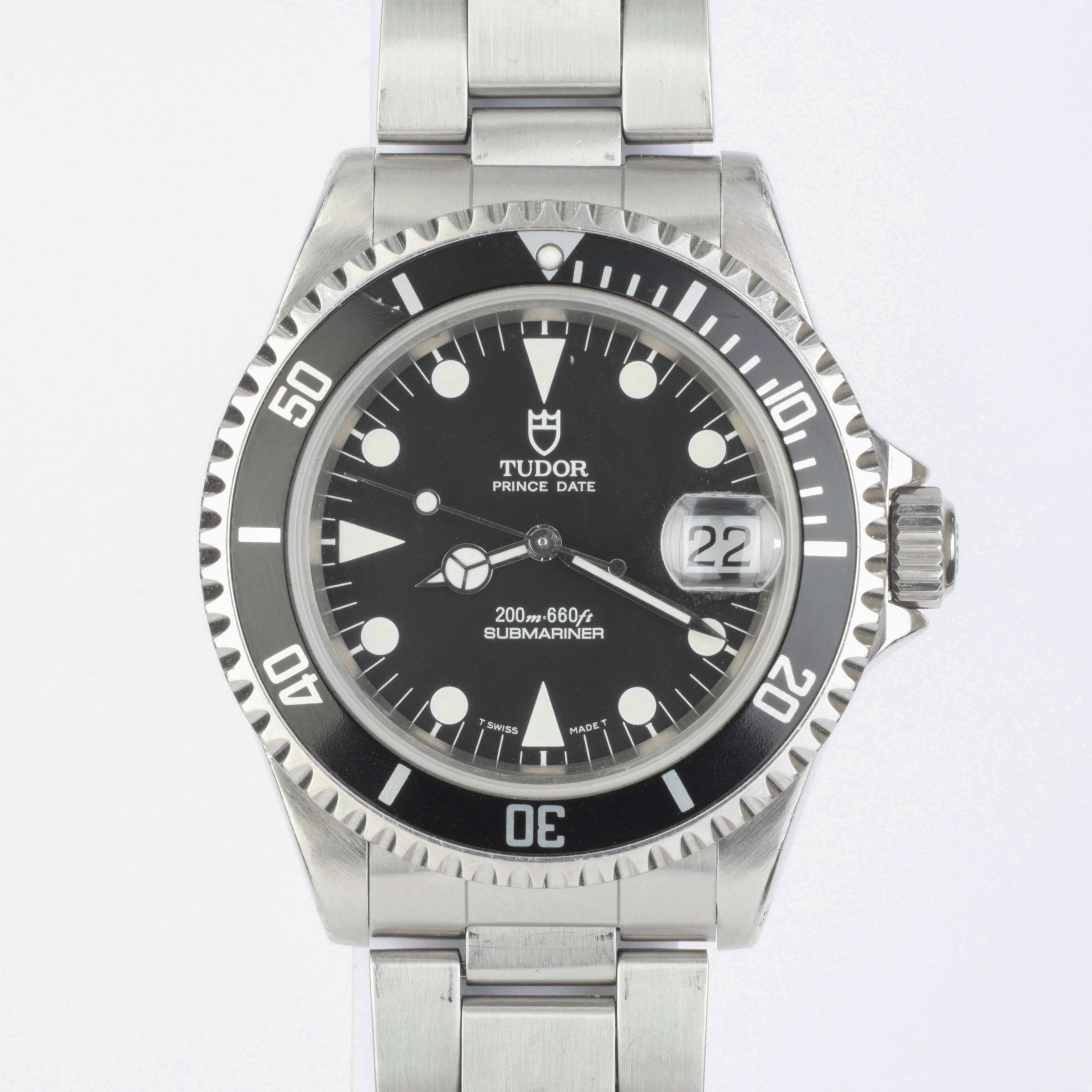 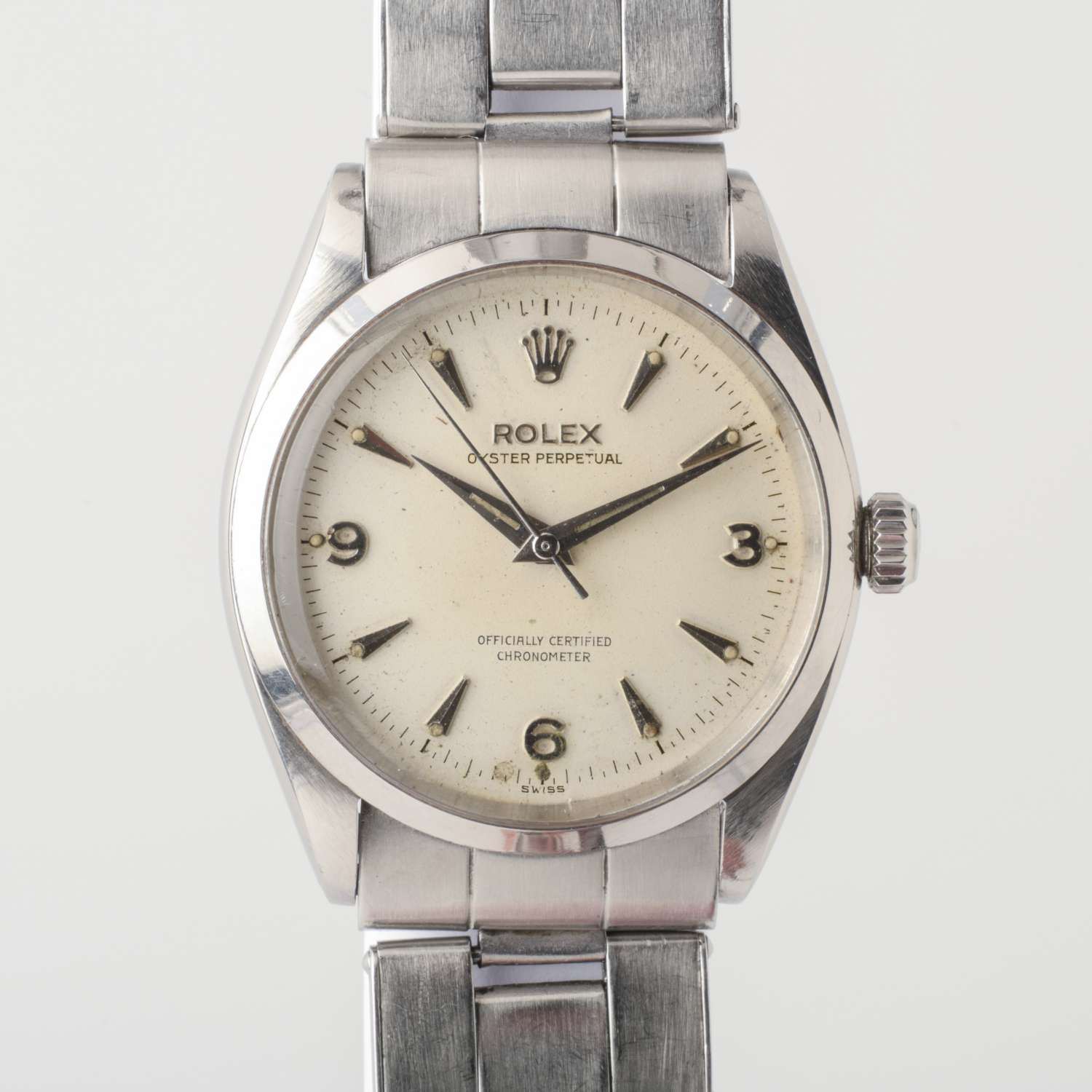 The Rolex Oyster Perpetual was introduced in the 1950s. Named for its waterproof Oyster case, and Perpetual self-winding movement, it’s elegant styling remains a classic today. 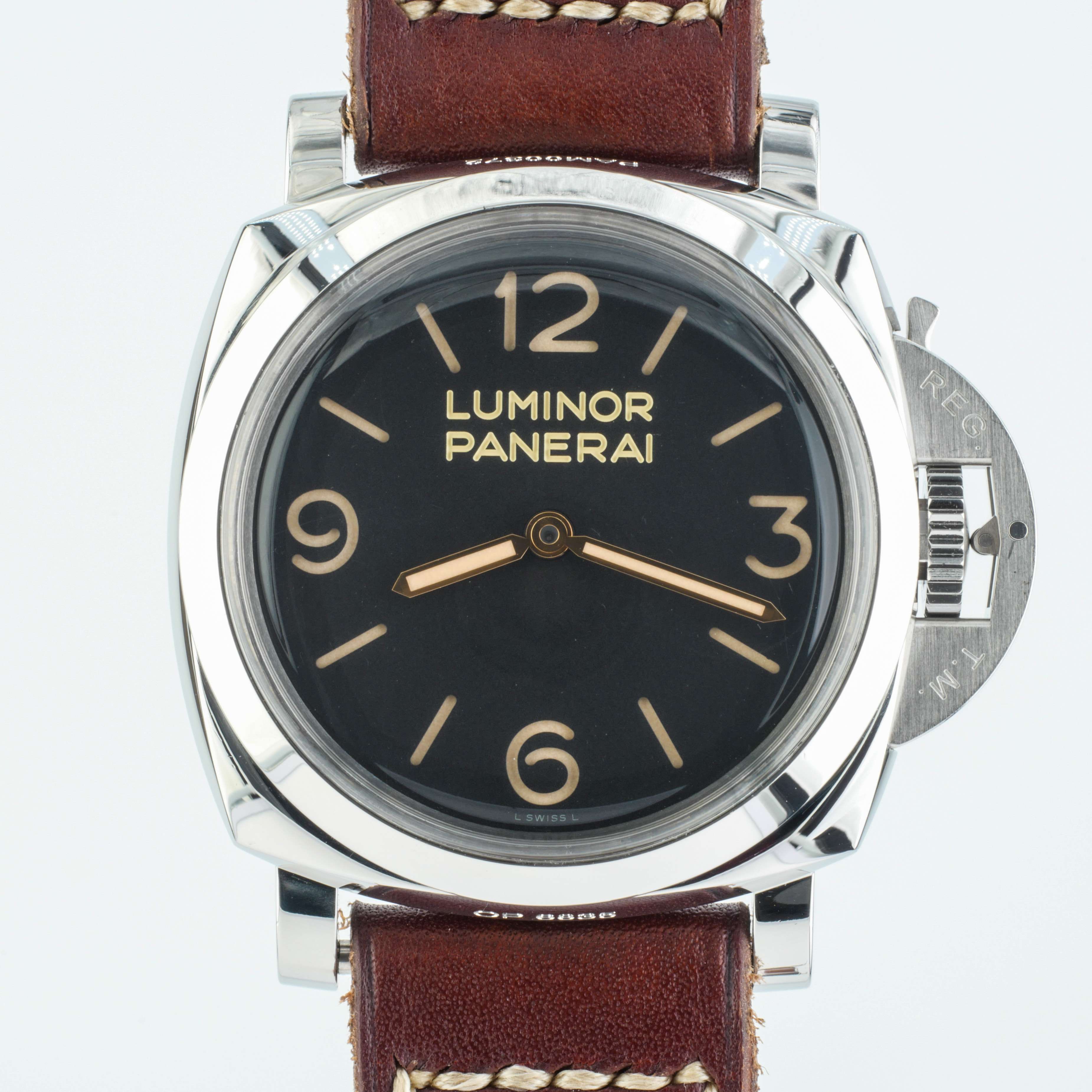 The Panerai PAM 372 is a beautiful nod back to Panerai’s rich history of watchmaking for the Italian Navy. It has a stainless steel case with exhibition back, showcasing Panerai’s in-house Calibre P. 3000 movement. The PAM 372 also has a 3-day power reserve and a clean, uncluttered aesthetic on the dial that is quintessential Panerai design. 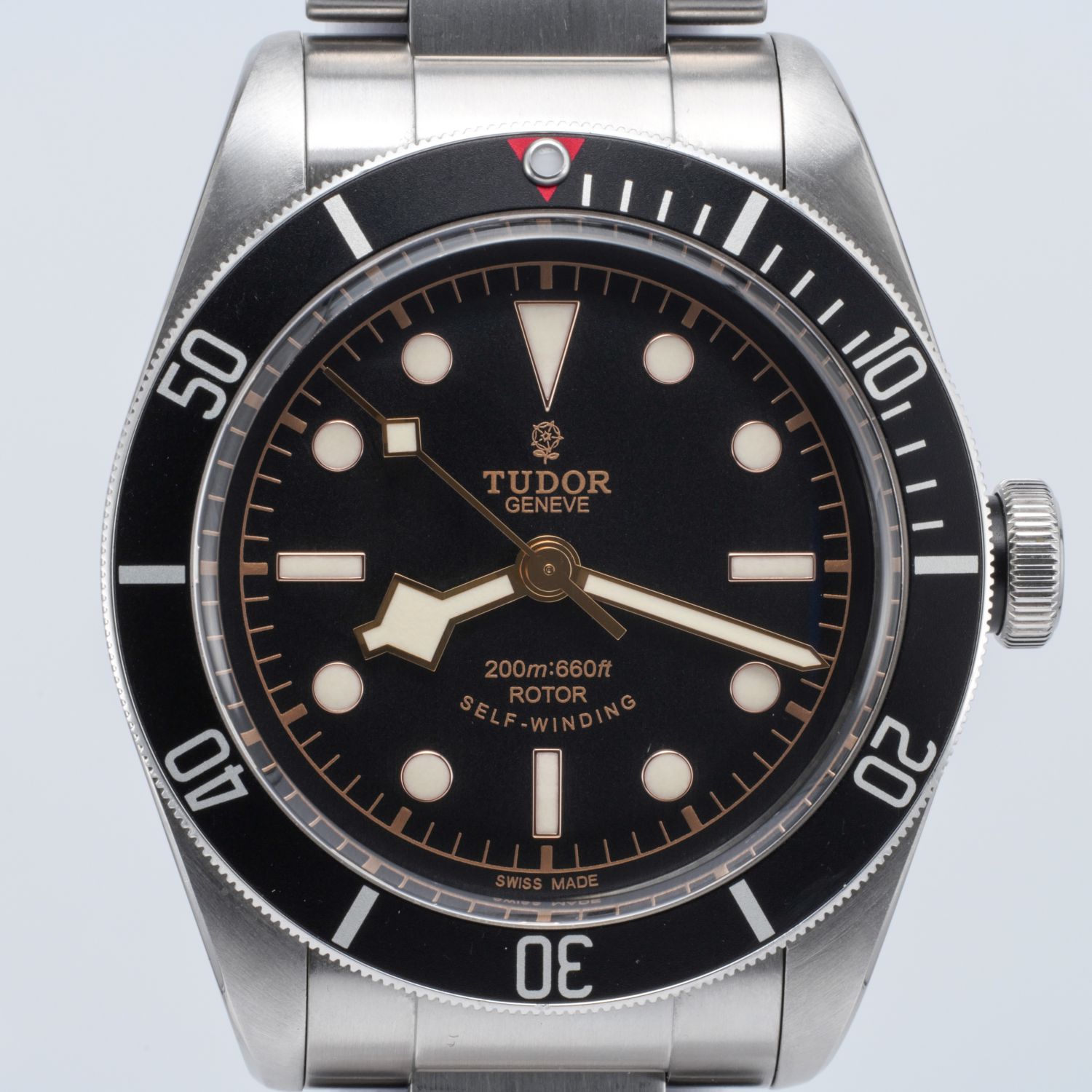 The Tudor Heritage Black Bay Black’s design is reminiscent of early Tudor dive watches. The stainless steel case, with it’s beveled satin finish lugs and polished sides has a classic aesthetic, as does the dial, with it’s vintage typeset and original Tudor rose logo at the 12 o’clock position. The rotating bezel with red triangle zero marker was designed with the diver in mind, as they have made it deliberately harder to turn the bezel when the zero marker is at the 12 o’clock position, to avoid inadvertent rotation. 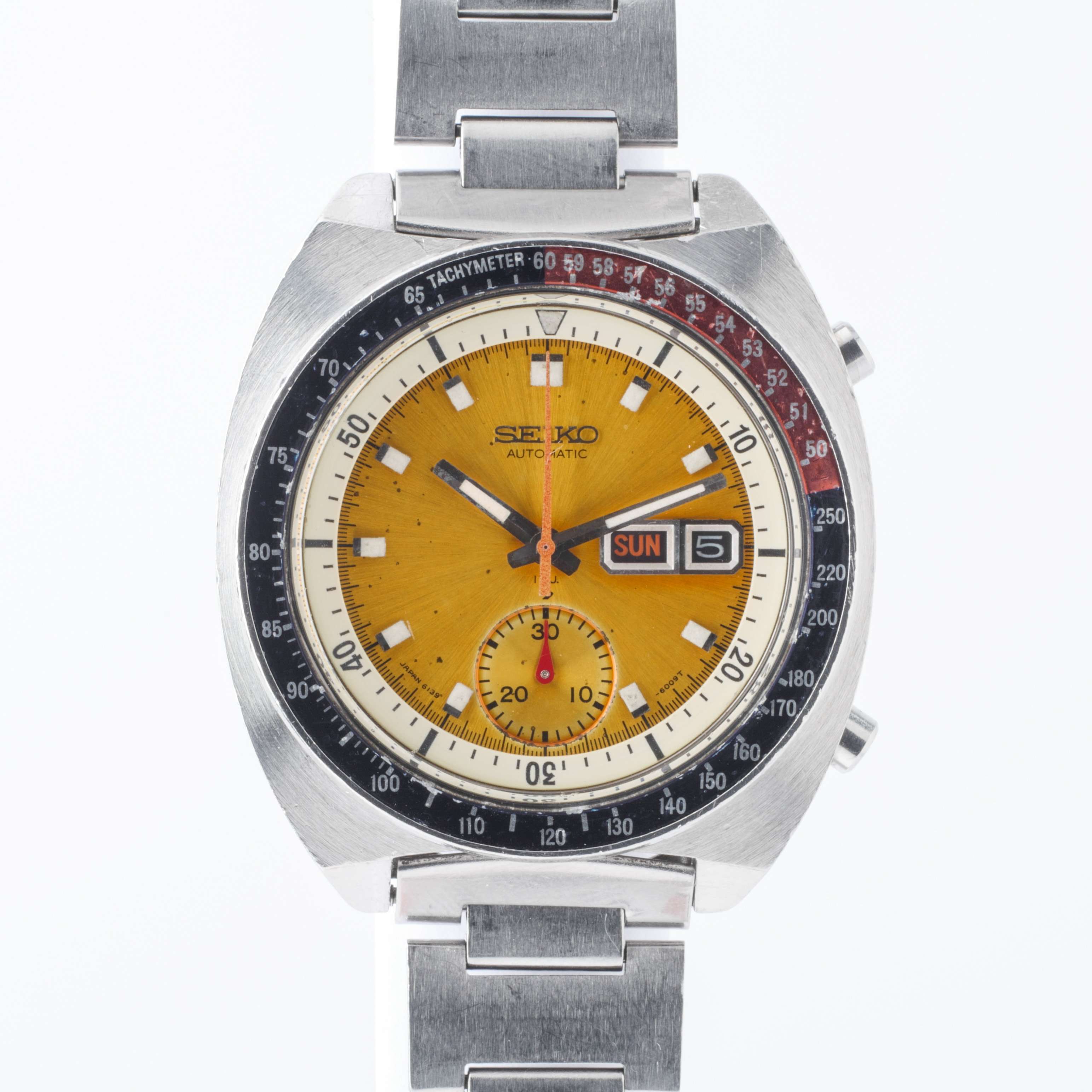 The Seiko Pogue 6139-6009T was the first automatic chronograph watch brought to market, in Japan, in 1969. It was released as the Seiko Speed-Timer, but later was referred to as the Pogue, due to it’s use by Colonel William Pogue, an astronaut for NASA, during his time on the Skylab 4 Mission. The watch is a single register chronograph. It has a 30 minute counter, no continuous seconds and a quickset day/date window. 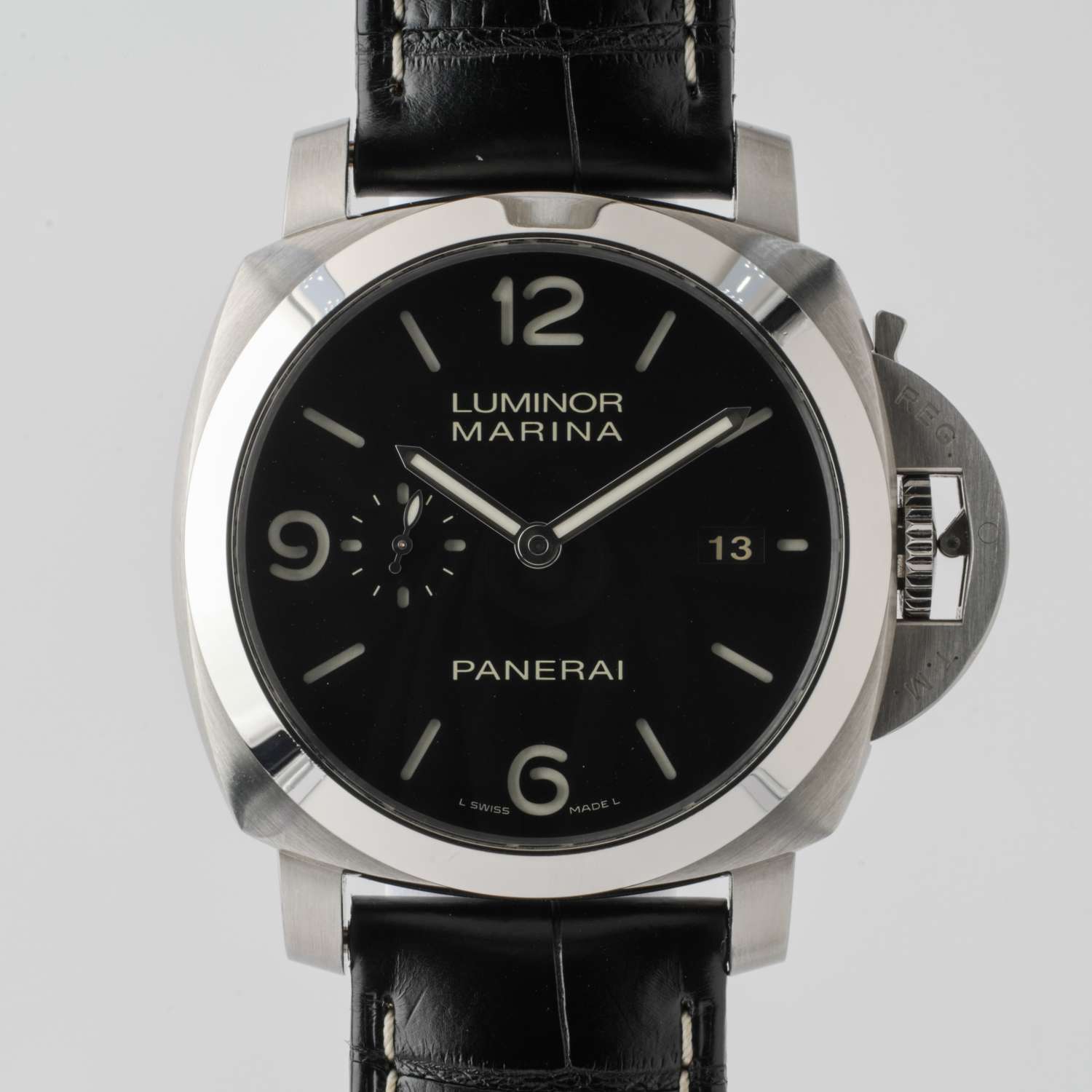 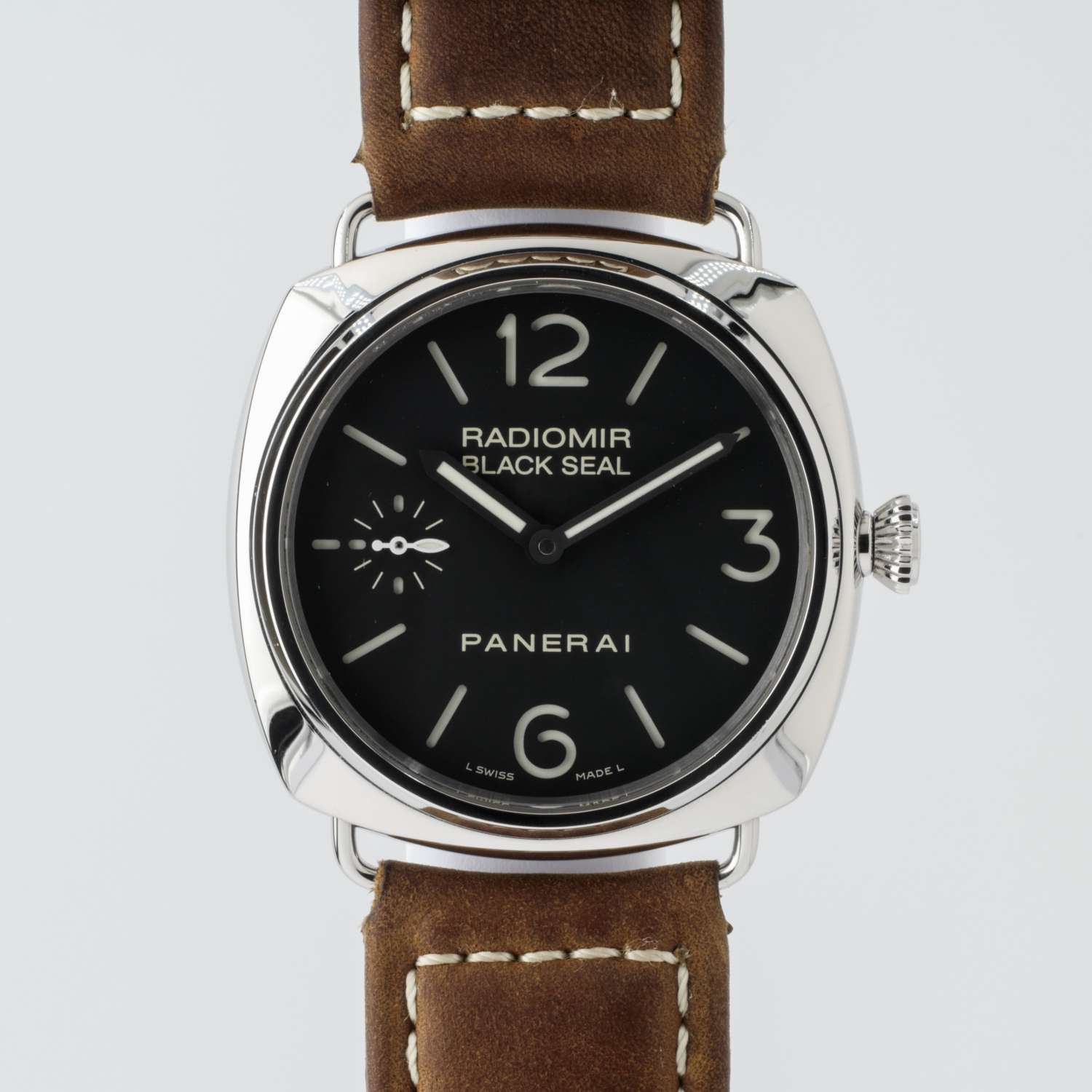 The Panerai Radiomir PAM 183 is one of the Historic Collection Panerai timepieces. It’s larger 45mm case with wire lugs are reminiscent of original Radiomir design worn by the Royal Italian Navy divers of the 1930’s. It's classic design of overlapping plates, creating their signature sandwich dial, the large Arabic style numerals on the 12, 3, and 6 o’clock positions, and handsome crown on the right side of the watch case, make it a truly beautiful timepiece on the wrist. 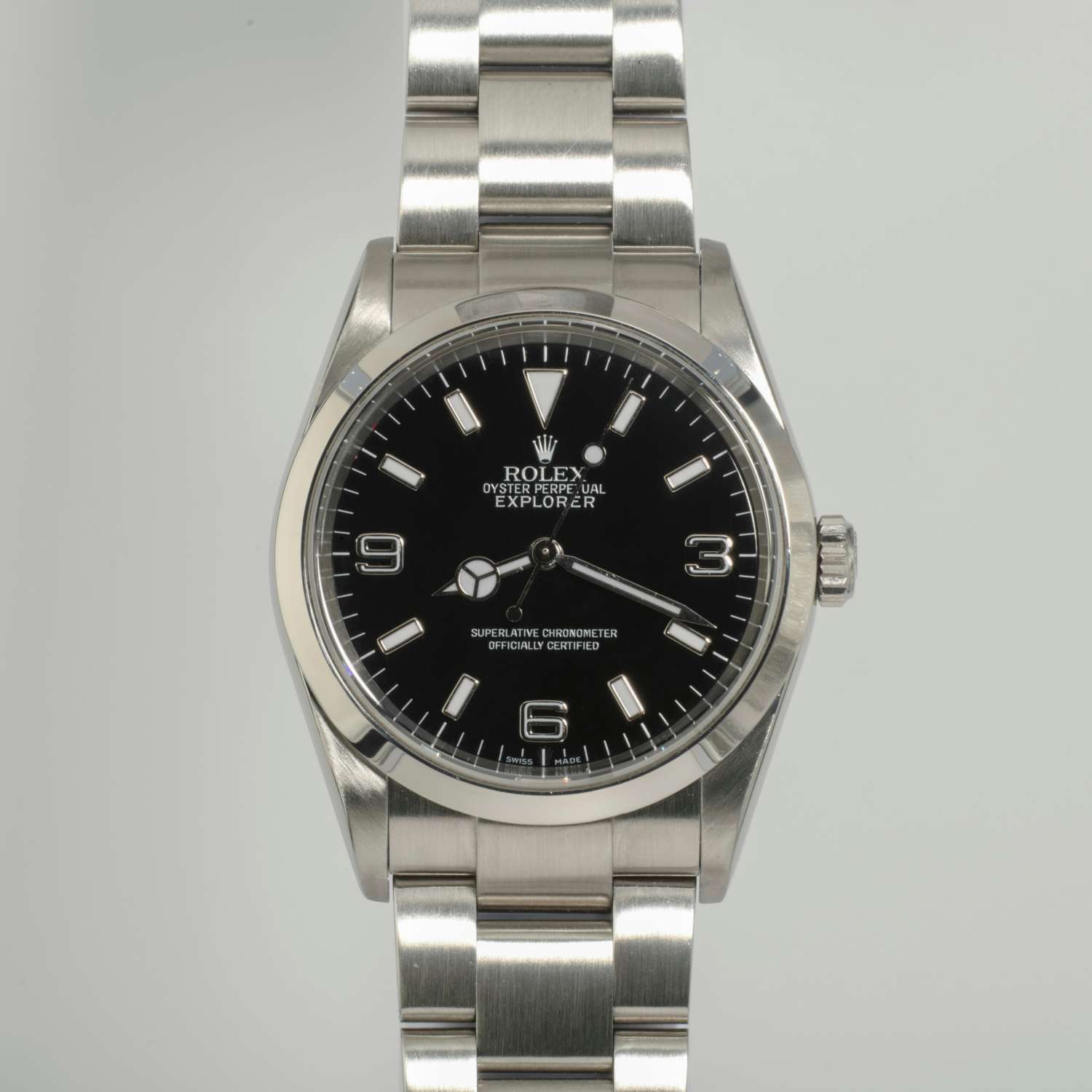 The Rolex Explorer was created as a true utility watch. One that could withstand and endure the most brutal of environments and tasks, while still maintaining its durability, as well as it’s elegant styling. Designed in honor of the exploits of those earliest of explorers who dared to climb Mt. Everest, and worn by Sir Edmund Hillary himself, the Rolex Explorer is an icon in the watch world. 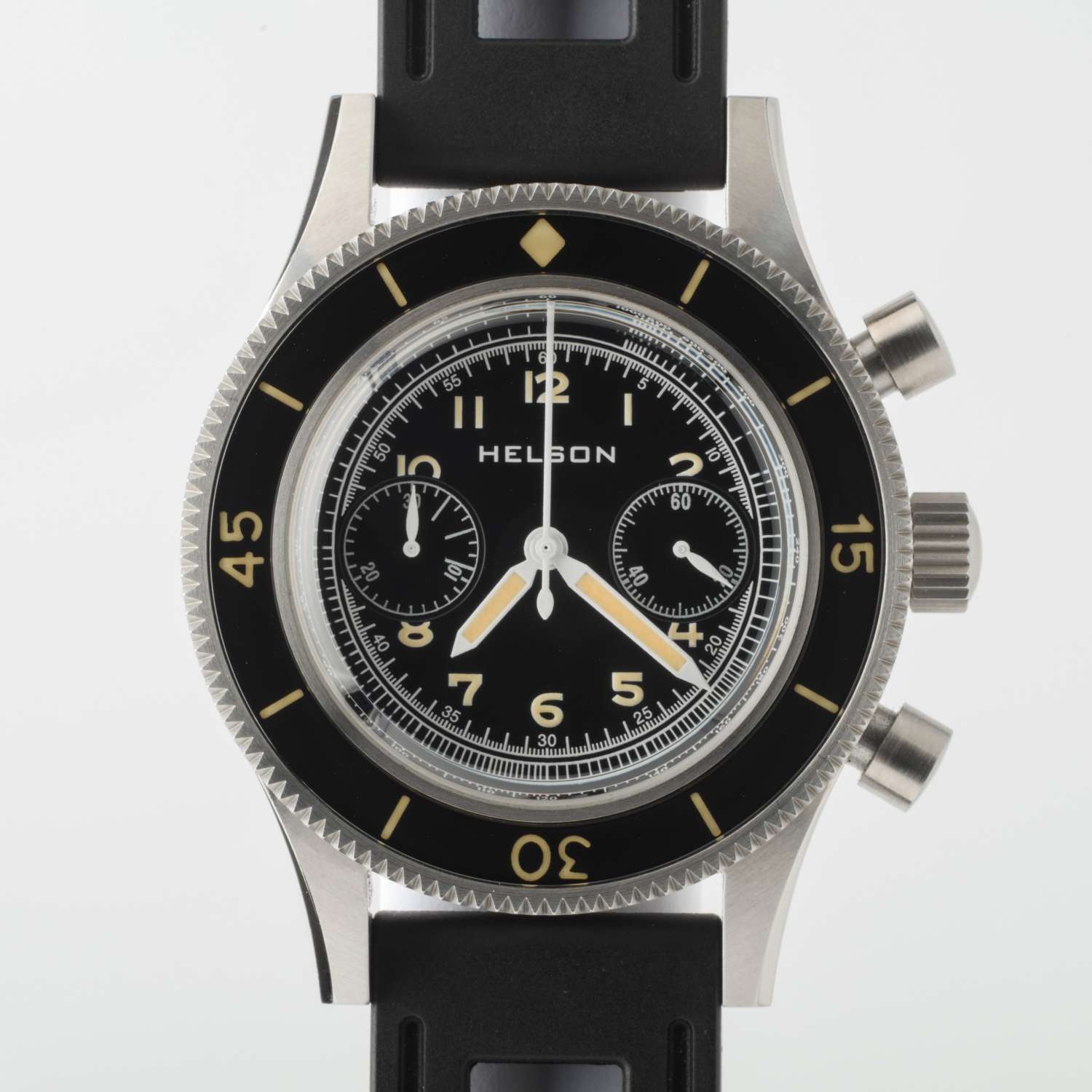 A true dive watch, the Helson Skindiver Chronograph was designed by a group of avid divers and sports enthusiasts from Asia and Europe. It is a finely executed timepiece that combines reliable functionality with vintage aesthetics that honor early dive watch design. 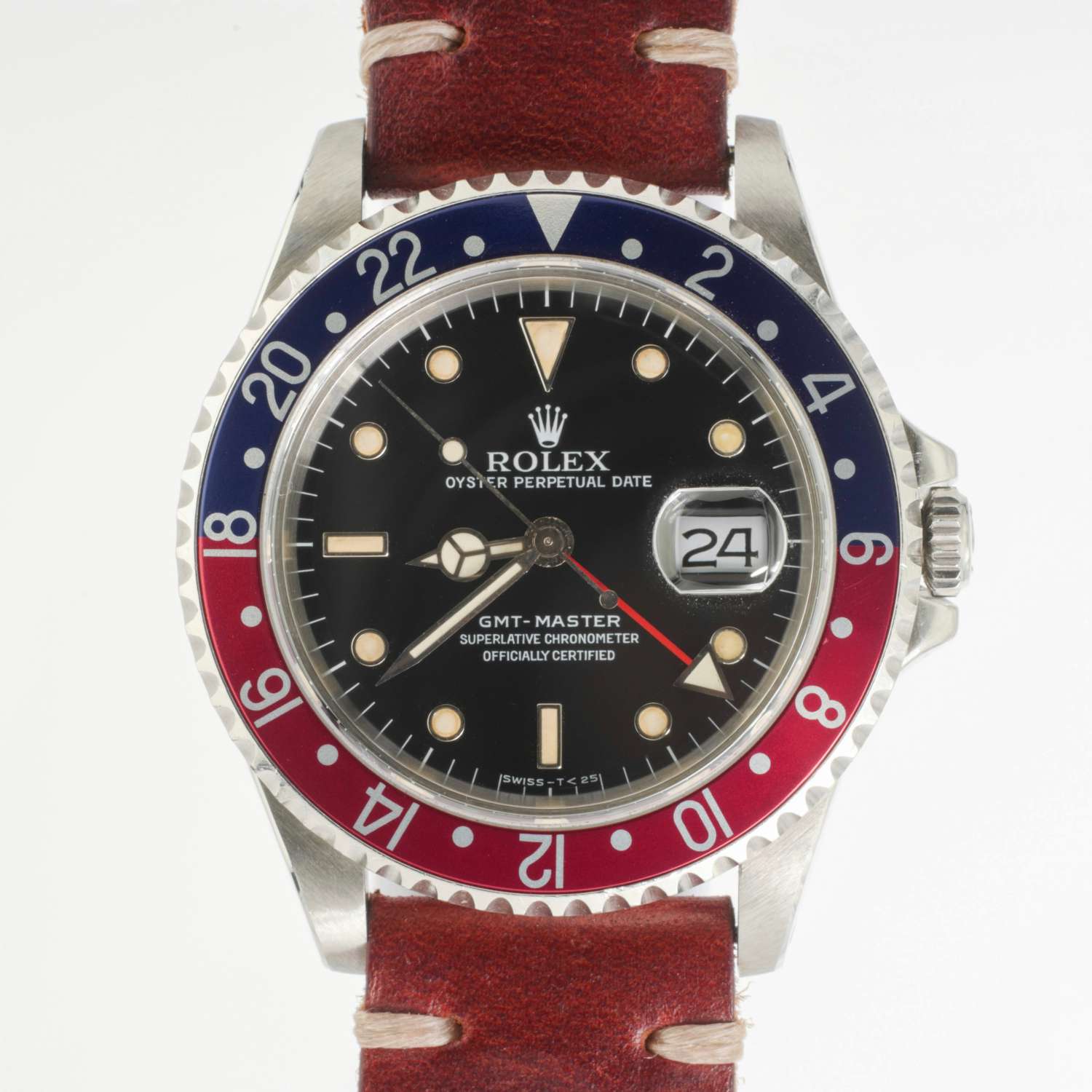 The Rolex GMT was designed at the request of Pan Am, in order for their commercial pilots to have a means to quickly be able to tell the time in 2 different time zones during transatlantic flights. The design became popular among commercial pilots, NASA pilots, and members of the US Air Force as well as business travelers. The iconic “Pepsi” bezel, it’s sleek styling and it’s origin history make the GMT Master a classic timepiece to own.